Good-feeling emotions have an evolved correlation with health, well-being, and successful decision-making prowess and actualization and bad-feeling emotions with their negation. Rather than using cognition to control emotional behavior, emotions have evolved to guide cognitive re-processing behavior into better feeling and healthier states of being. 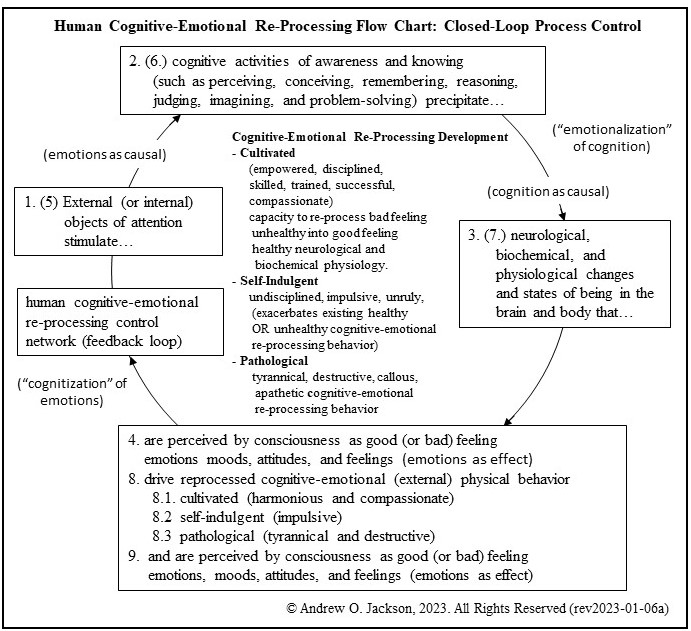 Ancient Greek philosophers and today’s academic dissertations of emotional suffering, slavery, and vulnerability exist only when cognitively dwelling upon the lack or absence of that which is wanted, desired, or intended. When these emotionally negative cognitive activities are re-processed, re-structured, and re-developed into emotionally positive cognitions, a being of emotional suffering, slavery, and vulnerability is transformed, transmuted, and renovated into a being of joy, freedom, and power with the imaginative, artistic, and creative mind necessary to fashion and manifest their wanted, desired, and intended world, reality, truth, and favored fortune.

A person driven by anger, jealousy, or greed may be emotionally driven in a movie, play, or book, but in science, these neurologically and physiologically induced states are a product of cognitive activities. Language acquisition and literacy educators teach a theory of emotionally driven behavior as used in literature, religion, psychology, law, and philosophy. But emotions do not precipitate the states and changes of neurological and biochemical physiology that drive behavior and are perceived as emotions; cognition does. Cognitive behavior therapies (CBTs) work because cognition, not emotion, precipitates the neurological, biochemical, and physiological being in the brain and body that drives behavior and is perceived as emotions. 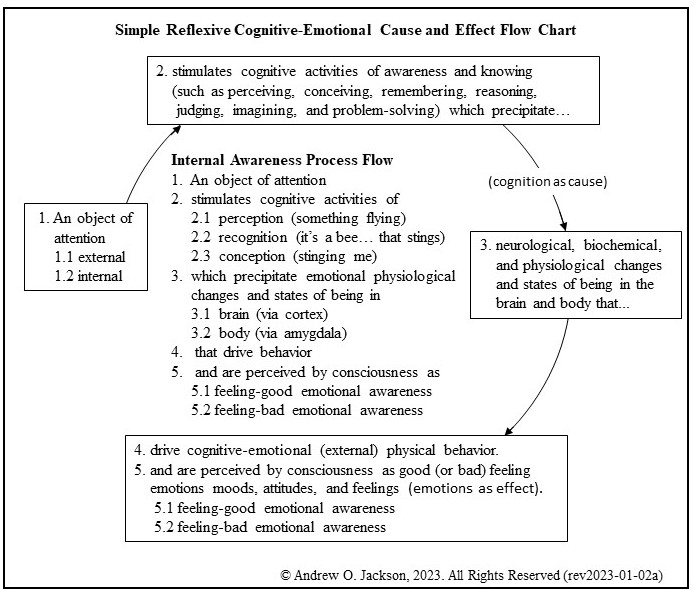 Ignorance is to speak of desire itself as the cause of suffering rather than understanding that it is the continual cognitive activity upon the lack of that which is desired that is the cause of suffering. It is the dysregulation of cognition, not emotion, that is causal to the aberrant changes in an individual’s biochemical physiology that leads to suicidal depression, psychotic mania, and dysfunctional biochemical physiology susceptible to disease and illness.

Supplement A: Supplement A: Dangers, Hazards, and Liabilities of Homer’s Theory of Emotionally Driven Behavior (2,000 words) 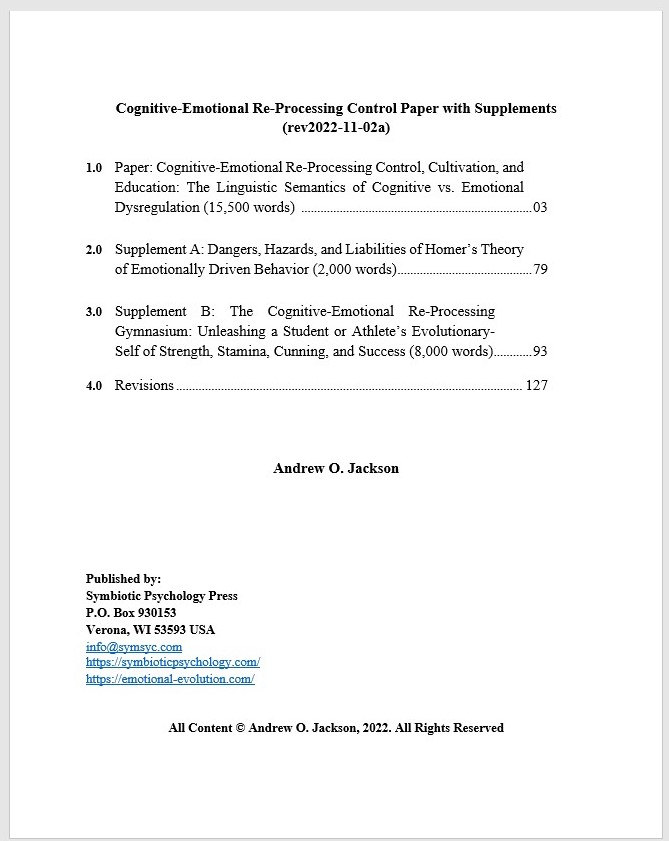 Emotion does not drive behavior as literature portrays in its poetic dance. Emotion is first an effect a reflection and awareness within the mind providing another dimension to its cognitive memories, thoughts, beliefs, logic, and imaginations that do precipitate the biochemical physiology in the brain and body that is driving behavior. If philosophy, religion, science, and law are ignorant of what drives human behavior and decision making, how can there be but laws of ignorance and injustice (and disorder, conflict, and crisis)? Justice founded upon falsehood is itself false and unjust.

Language acquisition and literacy education teachers are indoctrinating our students into a psychological theory of reflexive and animalistic emotionally driven behavior as found in literature, religion, psychology, law, and philosophy to the determent of a child’s health, well-being, and success. This linguistic short cut misconstrues emotions’ evolutionary role in re-processing a student’s cognitive activities and processes that do drive behavior. Cognition, not emotion, precipitates the changes and states of neurological, biochemical, and physiological being that does drive behavior (and is perceived as emotions).

Star Trek’s Spock and his Vulcan heritage of powerful emotional being that must be controlled through logic is resurrected on Earth with psychology’s cognitive behavior therapies (CBTs) which are designed to reign in so called “aberrant emotions” that supposedly drive dangerous behavior. But cognition, not emotions, precipitate the states and changes in biology that does drive behavior and  literary shortcuts in cognitive-emotional understanding misconstrue cognitive-emotional evolutionary dynamics and the symbiotic relationship of emotions to re-process negative feeling cognitive-behaviors towards positive feeling cognitive behaviors that correlate with health, well-being, and success.

Current cognitive-behavior therapies (CBTs) are based on the misleading belief that emotions are causal to biochemical, physiological changes within the brain and body. Because of this erroneous and false paradigm of aberrant and dangerous emotions, psychological science concludes that emotions must be controlled, managed, and regulated, even with the use of pharmaceuticals, if necessary. But it is the dysregulation of cognition, not emotion, that is causal to the aberrant changes in an individual’s biochemical physiology that leads to suicidal depression, psychotic mania, and dysfunctional biochemical physiology susceptible to disease and illness. 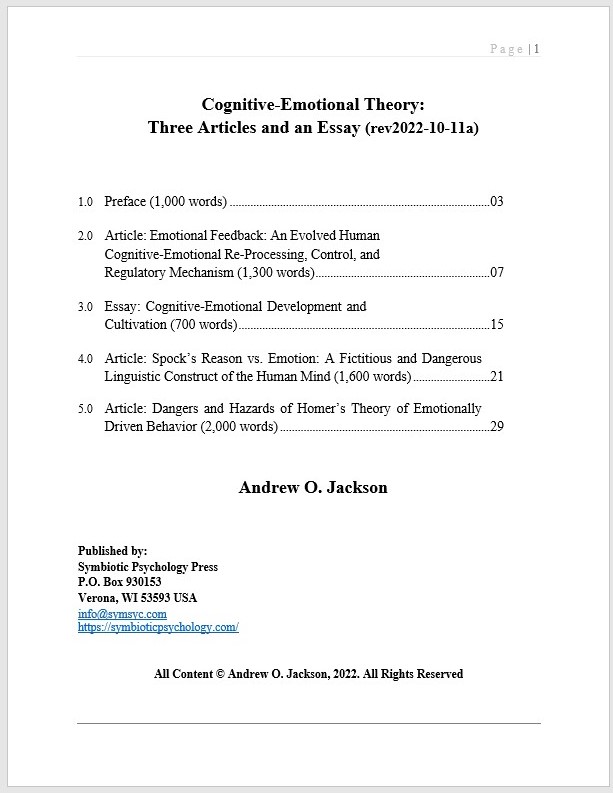 Language acquisition and literacy development through our primary, secondary, and collegiate education are neurolinguistically programming a culturally defined psychology of emotions and advancing a paradigm of emotionally driven behavior at the detriment to a child’s health, well-being, and success. Without our primary, secondary, and collegiate language teachers incorporating any understanding of human’s evolved cognitive-emotional re-processing mechanisms, language acquisition and literacy education sabotage philosophy, religion, science, and law and limit the growth and development of the culture and society in which they serve. It is human evolution (apart from animal) that has created the cognitive-emotional mechanisms that precipitate the neurology, biochemistry, and physiology consciously perceived as emotions and which are then consciously used to re-process, re-construct, and re-organize individual cognitive activities of memories, thoughts, beliefs, logic, and imaginations into the better emotional feeling state of being that signifies a person’s health, well-being, and success… if the skills, abilities, and beliefs are nurtured to do so. 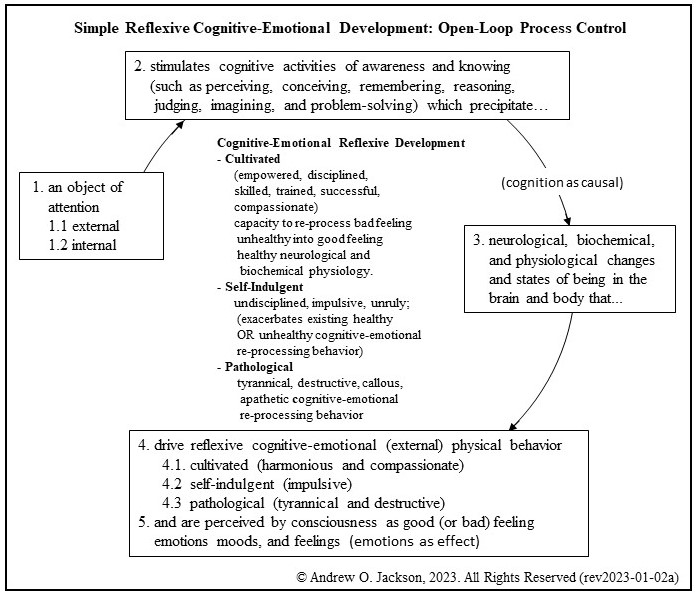 Because joy has an evolved correlation with health and well-being, we have evolved to be joyous beings. Yet a self-centered feels-good-is-good morality must be tempered within a compassionate awareness of the symbiotic connection between all humanity that demands cognitive-emotional re-processing skill, education, and training. The success of any educational institution cannot be defined solely by their students’ ability to cognitively achieve; success must be defined by their students’ ability to achieve with the presence of health, vigor, and joy along with the necessary cognitive skills, abilities, and motivation to nurture these learning conditions throughout life by employing their own evolved cognitive-emotional bio-feedback mechanisms. 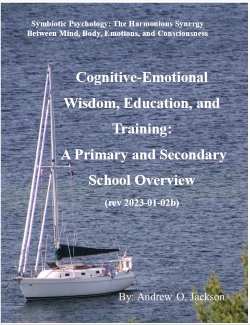 Cognitive-emotional development within an individual is a process of learning, practicing, and utilizing a variety of cognitive-emotional re-processing techniques to where positive feeling emotions, moods, and feelings accentuate physical expression and behavior.

Education, especially early childhood education must strive to develop the skills, abilities, and beliefs necessary to transform unhealthy emotionally negative cognitive behaviors into emotionally positive cognitive behaviors that signify health, well-being, and success of the individual as well as the health, well-being, and success of the culture and society in which they live.

by Caren Baruch-Feldman and Rebecca Comizio 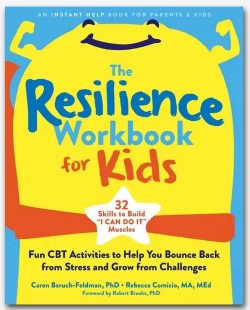 All of life is QiGong, the cultivation of energy. If an individual learns how to harmonize their cognitive activities with their emotions to feel good, they have the capacity to reach through time and space and attract the necessary ingredients and circumstances for their success, including luck. 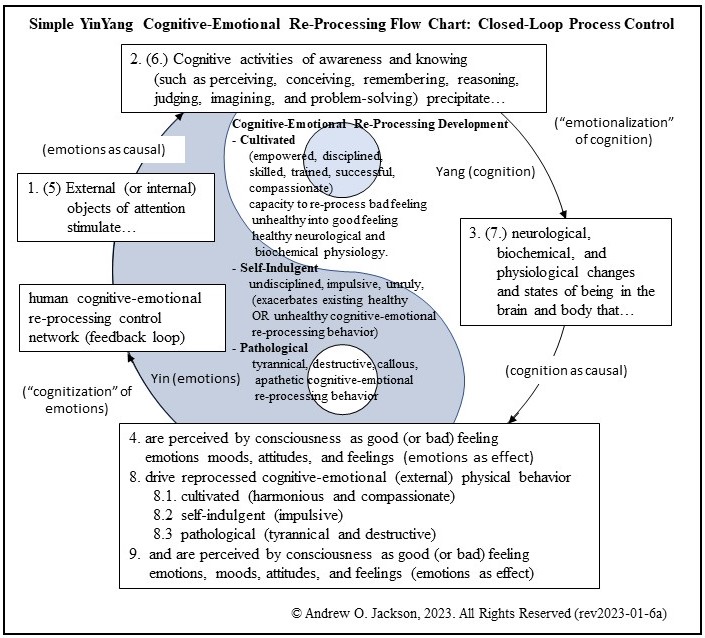 Success or failure in competition, or in life itself, is a cognitive- emotional state first determined within the battlefield of the mind. Bruce Lee never resolved the emotional dissonance brought on by the conflicts within his mind and thus was never able to move beyond the confines of a physical universe and become the master he so desired to be. 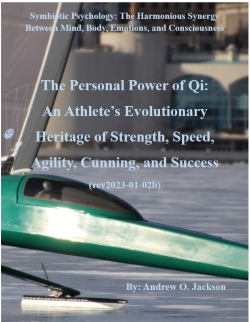 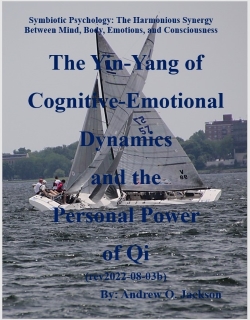 The Yin-Yang of Cognitive-Emotional Dynamics and the Personal Power of Qi (4,400 words)

The greatness of the human life experience emerges from the flames of individual desire arising out of hell’s fiery conflicts on earth. Intention is forged in these fires. Emotion aligns our journey with these new intentions. Each succeeding generation will have its own mountains to climb and waters to cross with their own stars to navigate towards. Intent is that guiding star; and it is our emotions that perceive its light. The more joyous the feeling, the more harmonious and powerful the wonders revealed through life’s journey. 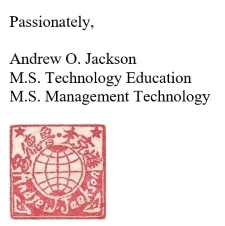